The Reason Interview With Nick Gillespie « »
Penn Jillette: Did His Libertarianism Survive Trump and COVID? 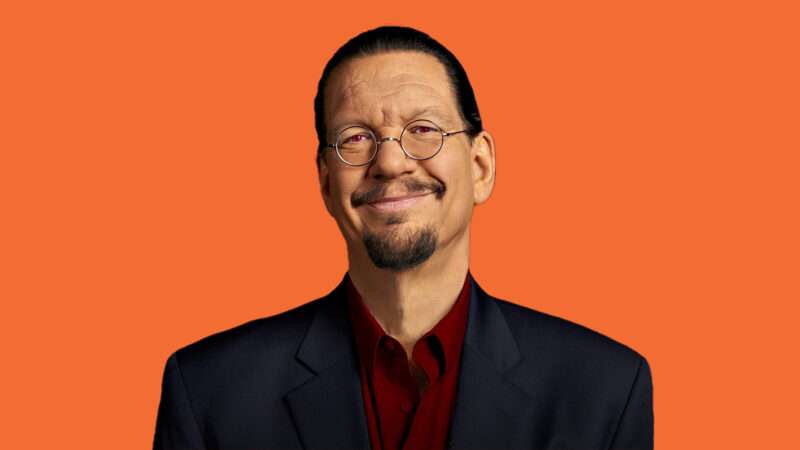 Today's episode—my absolute favorite to date, after almost six years!—is a marathon session with Penn Jillette, the larger, louder half of the fantastical and magical duo Penn & Teller.

Since the 1980s, Penn & Teller have been part of a broad movement to freakify and weirdo-ize American culture in a way that is profoundly individualistic and idealistic. They have helped to create a world where conformity has increasingly given way to self-expression. Before them, to me at least, magic was something dull, something mostly old men did, with boring card tricks, hokey gimmicks, capes, and magic wands. It was Doug Henning on Broadway with feather bangs and Harry Blackstone Jr. making Jiffy Pop on the stove.

Penn & Teller were so different, so alive and fresh, deconstructing magic at the very time they were blowing your mind. They were the reincarnation of Harry Houdini, with a punk attitude, and to me as a kid growing up in suburban New Jersey, they helped make me believe all things were possible, that you could create the life you wanted. Their fantastic show Bullshit! ran for eight seasons on Showtime, during which they debunked everything from alien abductions to the drug war to penis pumps to xenophobia (they even had me on that episode, speaking up for loosening the borders).

Penn especially captivated me: For my entire adult life, he's been one of the most vocal and visible self-identified libertarians out there, always insisting that, as a starting point in any discussion of any issue or problem, we should start by asking, "Can this be addressed by giving people more freedom to make their own choices?"

As impressive: In the mid-2010s, he dropped 100 pounds in three months for health reasons—personifying the personal responsibility and self-improvement near the very center of libertarianism (check out my 2016 interview with him on all that).

But then, in July 2020, he told the excellent website Big Think that the combination of Donald Trump's election four years earlier and the onset of the COVID pandemic was forcing him to rethink his libertarianism. In a video interview titled "The Year That Broke America's Illusions," he went so far as to say that "libertarianism has been so distorted, I don't know if I have to pull my name out of that ring. It's been adopted by people who don't seem to hold the responsibility side of it and don't seem to hold the compassion side of it." He even likened not wearing masks to drunk driving.

As you can imagine, his comments sent shock waves through the libertarian movement. For many of us, trillions in wasted spending, contradictory guidance from public health officials, arbitrary school and business shutdowns, and absurd policies like closing beaches and outdoor dining have made us even more skeptical of government power.

Why did the 2016 election and the pandemic cause one of the best-known libertarians to seemingly go in the other direction?

I recently attended FreedomFest in Las Vegas, where Penn & Teller have a longstanding residency at the Rio Casino, and caught up with Penn on the set of his popular podcast Penn's Sunday School to talk about Donald Trump, COVID restrictions, and whether his view of the world has really changed. Also joining the conversation was Matt Donnelly, a cohost of Penn's Sunday School.

Over nearly two hours, I talked with Penn about Trump, COVID, Bob Dylan, and the $64,000 question: Has libertarianism changed—or has he?

The post Penn Jillette: Did His Libertarianism Survive Trump and COVID? appeared first on Reason.com.

5h ago5h ago
Subscribe
Unsubscribe
Wekelijks
Every Monday, the libertarian editors of the magazine of “Free Minds and Free Markets”—Matt Welch, Nick Gillespie, Katherine Mangu-Ward, and Peter Suderman—discuss and debate the week’s biggest stories and what fresh hell awaits us all.
T
The More Perfect Union

26d ago3w ago
Subscribe
Unsubscribe
Maandelijks+
Real debate without the hate!
N
None Of The Above

12d ago1w ago
Subscribe
Unsubscribe
Maandelijks+
As the United States confronts an ever-changing set of international challenges, our foreign policy leaders continue to offer the same old answers. But what are the alternatives? In None Of The Above, the Eurasia Group Foundation’s Mark Hannah asks leading global thinkers for new answers and new ideas to guide an America increasingly adrift in the world. www.noneoftheabovepodcast.org
T
The Skepticrat

3d ago3d ago
Subscribe
Unsubscribe
Wekelijks
OPB Politics Now is a weekly podcast that takes a deep dive into the hottest political topics in Oregon and the Northwest. Every Friday, OPB’s political reporters and special guests offer in-depth analysis, discussion and insight into candidates, events and issues.
T
Truth vs Hype

3d ago3d ago
Subscribe
Unsubscribe
Wekelijks
Sebastian Payne takes you into the corridors of power to unwrap, analyse and debate British politics with a regular lineup of expert Financial Times correspondents and informed commentators. New episodes available every Saturday morning. Hosted on Acast. See acast.com/privacy for more information.
P
Pod Save the People

7d ago0w ago
Subscribe
Unsubscribe
Wekelijks
Organizer and activist DeRay Mckesson explores news, culture, social justice, and politics with analysis from Kaya Henderson, De’Ara Balenger, and others. Then he sits down for deep conversations with experts, influencers, and diverse local and national leaders. New episodes every Tuesday.
R
Reasons to be Cheerful with Ed Miliband and Geoff Lloyd