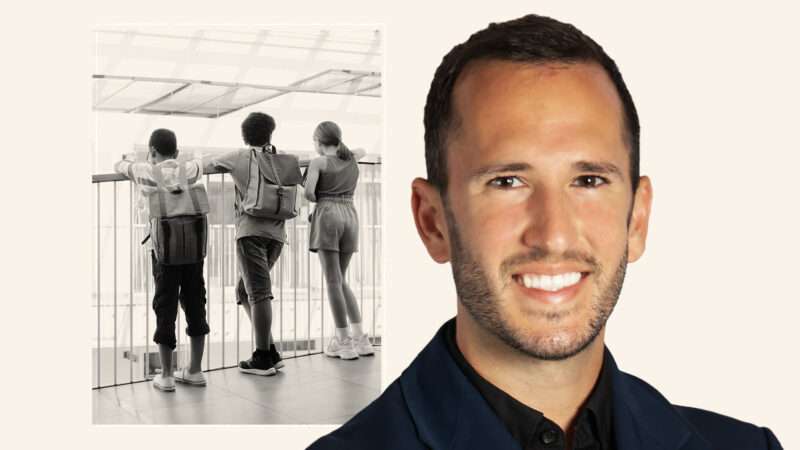 You've probably heard the latest news that school lockdowns during the COVID pandemic are responsible for erasing two decades of progress in math and reading test scores. On national tests of 9-year-olds, math scores declined seven points between 2020 and 2022. Reading scores dropped by five points. These are "some of the largest declines" in half a century.

Such news comes on top of the massive frustration about chaotic, nonsensical openings and closings of schools, unscientific mask mandates for K-12 students, and insane policies like one in Washington, D.C., where the mayor and City Council recently decreed that kids ages 12 and older would need to be vaccinated even for remote learning, a measure that would have barred 40 percent of the city's black teens from getting an education. That policy was, thankfully, pushed back until January 2023, but it's still on the books, lurking like a bully at the far end of the hallway.

Today's guest on The Reason Interview With Nick Gillespie is Corey DeAngelis, a senior fellow at the American Federation for Children. Corey used to work at Reason Foundation, the nonprofit that publishes this podcast, has a Ph.D. in education from the University of Arkansas, and is widely recognized as one of the leading activists pushing for radical school choice, in which funding dollars follow children to whatever learning institutions they and their parents decide on, whether private, public, religious, secular, charter, online, you name it.

I caught up with Corey at FreedomFest, the annual gathering in Las Vegas, just after Arizona had passed the biggest school choice law in the country, with $7,000 of state funding now following each student per year. We talked about how COVID lockdowns—so heavily pushed by teachers unions—radically raised parental awareness about how bad most K-12 education is; why top-down attempts to ban critical race theory and other specific curricula are misguided and ineffective; recent Supreme Court decisions that rightly get rid of legal concerns over tax dollars funding students at religious schools; why Texas is so incredibly awful on school choice despite being run by Republicans; why Republicans have nonetheless emerged as the party of school choice; and why all of us, whether we have kids in the K-12 gulag system or not, should be invested in education reform.

2d ago2d ago
Subscribe
Unsubscribe
Wekelijks
Every Monday, the libertarian editors of the magazine of “Free Minds and Free Markets”—Matt Welch, Nick Gillespie, Katherine Mangu-Ward, and Peter Suderman—discuss and debate the week’s biggest stories and what fresh hell awaits us all.
N
None Of The Above

1h ago1h ago
Subscribe
Unsubscribe
Maandelijks+
As the United States confronts an ever-changing set of international challenges, our foreign policy leaders continue to offer the same old answers. But what are the alternatives? In None Of The Above, the Eurasia Group Foundation’s Mark Hannah asks leading global thinkers for new answers and new ideas to guide an America increasingly adrift in the world. www.noneoftheabovepodcast.org
T
The Skepticrat

26d ago3w ago
Subscribe
Unsubscribe
Maandelijks
Truth vs Hype travels to the Ground Zero of the biggest story. Every week, re-defining reportage on Indian television.
P
Pod Save the People

2d ago2d ago
Subscribe
Unsubscribe
Wekelijks
Organizer and activist DeRay Mckesson explores news, culture, social justice, and politics with analysis from Kaya Henderson, De’Ara Balenger, and others. Then he sits down for deep conversations with experts, influencers, and diverse local and national leaders. New episodes every Tuesday.
P
Payne's Politics

31m ago31m ago
Subscribe
Unsubscribe
Wekelijks+
A bootstrappers podcast for founders, entrepreneurs, visionaries and dreamers who are building businesses from the ground up without the taking on debt or selling equity. Here we cover marketing, sales, organization and mindset issues that matter to you
R
Reasons to be Cheerful with Ed Miliband and Geoff Lloyd