The Reason Interview With Nick Gillespie « »
Balaji Srinivasan: How To Build Your Own Country in the Cloud 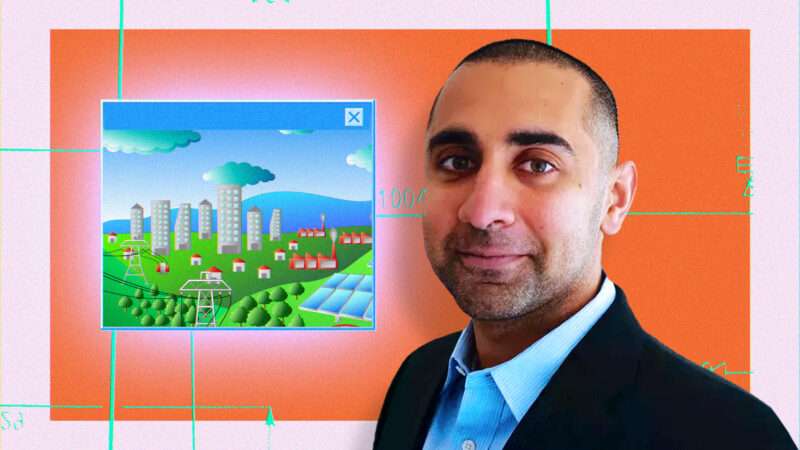 In 2013, the serial entrepreneur Balaji Srinivasan gave a widely discussed talk at the tech incubator Y Combinator on a paradigm derived from the work of political economist Albert O. Hirschman. There are two basic paths to reform, he explained: You can speak up and remake a system from within ("voice") or you can simply leave and build something new that might one day takes its place ("exit").

That latter concept is the framework through which Silicon Valley tends to solve problems, and it captures the worldview of Srinivasan, whom venture capitalist Marc Andreessen says has "the highest output per minute of new ideas of anybody I've ever met in my life."

In his new book, The Network State: How to Start a New Country, Srinivasan makes the case for migrating much—though not all—of our lives onto the internet while changing how we get together in meatspace. Ever-improving digital tools give humans an unprecedented and always-accelerating ability to create opt-in, fully voluntary communities where people choose to meet, work, live, and love.

From existing, terrestrial countries that are attracting immigrants with the promise of a better standard of living to blockchain communities that draw participants by laying out clear-cut, contractual rules, responsibilities, and obligations, Srinivasan articulates a future that is profoundly democratic and consensual—thus liberating us from a status quo in which self-determination is little more than a pipe-dream.

Raised in suburban Long Island, Srinivasan holds a Ph.D. in electrical engineering from Stanford. He co-founded the genetic testing firm Counsyl and served as the first chief technology officer of Coinbase, the cryptocurrency exchange. He's been a fierce critic of the FDA, which might account for his being short-listed to head up the agency under President Donald Trump.

"What if this coronavirus is the pandemic that public health people have been warning about for years?," he tweeted in January 2020, as Vox and mainstream outlets were busy attacking Silicon Valley venture capitalists for taking the crisis too seriously. "It would accelerate many pre-existing trends," he wrote, "border closures, nationalism, social isolation, preppers, remote work, face masks, distrust in governments."

I talked with Srinivasan about The Network State, the rise of China as a tightly centralized global power, and the future of freedom both online and offline.*

CORRECTION: The original version of this writeup mischaracterized Srinivasan's opinion on whether Peter Thiel is part of the "descending class."

The post Balaji Srinivasan: How To Build Your Own Country in the Cloud appeared first on Reason.com.

5h ago5h ago
Subscribe
Unsubscribe
Wekelijks
Every Monday, the libertarian editors of the magazine of “Free Minds and Free Markets”—Matt Welch, Nick Gillespie, Katherine Mangu-Ward, and Peter Suderman—discuss and debate the week’s biggest stories and what fresh hell awaits us all.
T
The More Perfect Union

26d ago3w ago
Subscribe
Unsubscribe
Maandelijks+
Real debate without the hate!
N
None Of The Above

12d ago1w ago
Subscribe
Unsubscribe
Maandelijks+
As the United States confronts an ever-changing set of international challenges, our foreign policy leaders continue to offer the same old answers. But what are the alternatives? In None Of The Above, the Eurasia Group Foundation’s Mark Hannah asks leading global thinkers for new answers and new ideas to guide an America increasingly adrift in the world. www.noneoftheabovepodcast.org
T
The Skepticrat

3d ago3d ago
Subscribe
Unsubscribe
Wekelijks
OPB Politics Now is a weekly podcast that takes a deep dive into the hottest political topics in Oregon and the Northwest. Every Friday, OPB’s political reporters and special guests offer in-depth analysis, discussion and insight into candidates, events and issues.
T
Truth vs Hype

3d ago3d ago
Subscribe
Unsubscribe
Wekelijks
Sebastian Payne takes you into the corridors of power to unwrap, analyse and debate British politics with a regular lineup of expert Financial Times correspondents and informed commentators. New episodes available every Saturday morning. Hosted on Acast. See acast.com/privacy for more information.
P
Pod Save the People

7d ago0w ago
Subscribe
Unsubscribe
Wekelijks
Organizer and activist DeRay Mckesson explores news, culture, social justice, and politics with analysis from Kaya Henderson, De’Ara Balenger, and others. Then he sits down for deep conversations with experts, influencers, and diverse local and national leaders. New episodes every Tuesday.
R
Reasons to be Cheerful with Ed Miliband and Geoff Lloyd