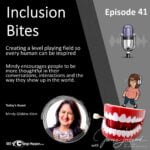 Mindy encourages people to be more thoughtful in their conversations, interactions and the way they show up in the world. This includes putting more thought' into 'thought leadership'.

Mindy believes there is broad recognition that we don’t have a level playing field in many sectors/pockets of society and she believes things can be different. She looks to inspiration; working with people that want to inspire others, but says they too need to feel inspired. They need to feel that they are going to be given a chance for their voice to be heard and she works to create opportunities to allow this. It is easier to speak out since the introduction of the internet, but it is about what happens after, it is about gaining traction, having an audience, and seeing your words make a difference. We cannot control how our message will land, or how people will react to us, but Mindy says if we do our best, with the right intentions then it will land. She often sees people getting upset when they don’t get traction, but says perseverance is key.

Mindy has a saying within her organisation ‘left to chance some people are not given a fair chance’, although she does believe this is slowly changing and we are starting to see equity where it has not previously existed, especially in the media as they shine the spotlight on underrepresented sectors. We don’t know what we can’t see so sometimes it can just take one story to open people’s eyes and help them see things they may not have previously been aware of. If we don’t know we can’t change, so it is about learning and making mistakes, rather than getting caught up on trying to be right the first time. Mindy believes if we behave in an intentional way, holding ourselves accountable then although we can change the situation, we can change our reactions towards it and how we act. If there is something you notice in the world that doesn’t seem right, and you can do something about it then this is an opportunity, individually we may not be able to make a big change, but if everyone does this then it has a cumulative effect.

Mindy’s son is transgender, and she initially felt she did not cope the way she thought she should, or like the person she thought she was. She used this experience as a jumping off place, showing that if you are not happy with your own behaviour you can change this and learn from the experience, perhaps changing the situation, or something about yourself.

We tend to gravitate to people that are similar to ourselves, but Mindy says we are all so multi-faceted that by definition this should still include a diverse range of people. We often do not realise who or what is influencing us so we need to ensure that we are confident enough to know that we do not have to engage in every single situation, and that we have the power to walk away. There is a difference between belonging, where you are part of a group that everyone is content and happy with, as opposed to fitting in where you may be trying to change yourself to adapt to others.

Please connect with our hosts and guests, why not make contact..?

Brought to you by your host

A huge thank you to our wonderful guest

The post Creating a level playing field so every human can be inspired appeared first on SEE Change Happen: Transgender Awareness & Inclusion.